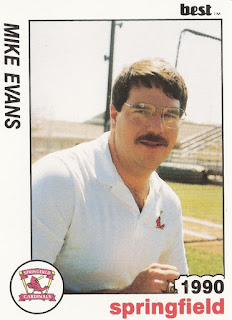 Mike Evans started his athletic training career in high school and in college, according to his Best card.

He worked at both Central Missouri State University and at Helias High School in Jefferson City, Mo.

From those beginnings, he moved on to the pros as a trainer in the St. Louis Cardinals system. He spent at least seven seasons there at two different levels.

Evans began at Missouri State University, where he earned his degree in physical education. He then went on to Central Missouri and Helias.

He started with the Cardinals in 1987, serving as trainer at short-season Erie. He then followed the franchise to Hamilton, Ont., for 1988.

Evens then arrived at single-A Springfield for 1990. His Best card talked up his previous stints keeping players healthy.

"Mike comes to Springfield," the card reads, "with plenty of athletic training experience."

He stayed at Springfield for at least four seasons. His most recent available card came in 1993.