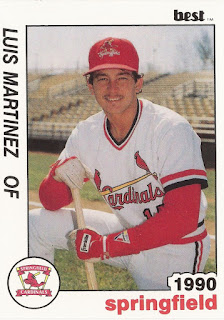 The Tulsa Driller hurler walked two batters in front of Arkansas' Luis Martinez in this August 1991 game and Martinez took advantage, according to The Tulsa World.

Martinez did so by hitting his second home run of the season, putting the game out of reach, The World wrote.

Martinez hit that home run in his seventh season as a pro, his first at AA. He also hit it in his final season as a pro. Martinez played those seven pro seasons. He never made the majors.

Martinez' career began in 1985, signed by the Reds as a free agent out of his native Puerto Rico.

After spending 1987 between single-A Tampa and the GCL, Martinez started 1988 at single-A Greensboro. He then moved to the Cardinals and rookie Johnson City after being released by the Reds.