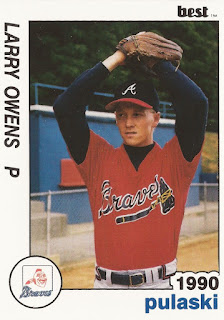 Larry Owens took over the Bellarmine University baseball program in 2013. He later told his hometown Jeffersonville News and Tribune the kind of player he looked to bring to the school.

"I want to find great students who love to play baseball," Owens told The News and Tribune. "I want baseball to be their passion. I don't want it to be something they just like to do. We want to find a good mix of a kid that is a great student who is here to get a degree and loves baseball."

Owens' long career in baseball began in 1990, taken by the Braves in the 27th round of the draft out of Armstrong Atlantic State University in Georgia.

His playing career ended up being about as brief as it could be. Assigned to rookie Pulaski, Owens took the mound in just four games. He started two of them. He gave up 10 earned runs in 12.2 innings. Those four outings marked the extent of his pro playing career.

Owens then started his coaching career, one that started in college, took him to the pros and then back to college again.

In 2005, Owens served as pitching coach in the independent Golden League. In 2007, he was back in the minors, coaching at single-A Kannapolis. He stayed there for four seasons.

In 2008, Owens worked with a young Michael Socolovich, helping him regain composure in a game.

"I felt comfortable. When I walked Rizzotti [in the fifth], the next hitter I threw too hard and I lost my focus," Socolovich told MiLB.com. "[Pitching coach Larry Owens] talked to me and we made an adjustment to keep the ball down."

Owens moved to rookie Bristol in 2011, staying there three seasons. Owens praised his rookie league staff to The Bristol Herald Courier early in the 2013 season.

"The big hurdle is generally strikes," Owens told The Herald Courier. "It's really good that they've came in and done a great job and thrown the ball over the plate and given us a chance to win most every night so far. That's all you can ask of them."

That August, Owens was named head coach at Bellarmine. He continues there in 2015.