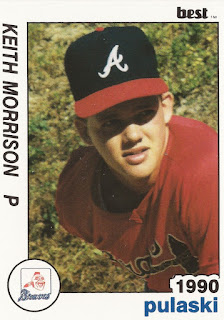 Sumter Flyers starter Keith Morrison went seven innings in this June 1991 game for single-A Sumter and his manager Lorenzo Bundy was impressed, according to The Sumter Item.

That's because Morrison gave up just four hits and one solo home run, according to The Item. That home run also came at the hands of future major league regular Carlos Delgado.

"Keith did a real good job; he was a lot more aggressive than he has been," Bundy told The Item after the win. "He kept his fastball down. It was a real encouraging effort from him."

Morrison was in his second professional season that year. He went on to get four more pro campaigns. He made it as high as AAA, but he never made the majors.

Morrison's career began in 1990, taken by the Braves in the 38th round of the draft out of Middle Georgia College.

Morrison played his first season with the Braves at rookie Pulaski. He started 13 games, going 6-6 and ended with a 4.10 ERA.

He moved to single-A Macon to start 1991. He was traded early in the season to the Expos in a deal that sent Otis Nixon to the Braves. Overall, he had a 3.66 ERA and a 6-7 record over 15 starts.

Morrison played 1992 between single-A Albany and Rockford. He moved to the Angels system for 1993, playing at high-A Palm Springs.