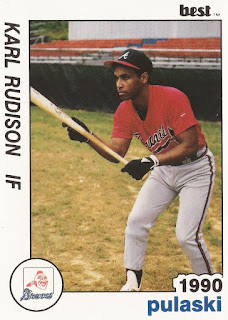 Karl Rudison's National Baseball Congress Texas State Tournament team took a big win this day in July 1988 and Rudison was in the middle of the scoring, according to The Seguin Gazette-Enterprise.

Rudison went on to return to college that fall and the next year. He then turned pro in 1990, but his pro career was brief. It lasted just 47 games.

Rudison's pro career began and ended that year in 1990, signed by the Braves as a free agent. Rudison played his college ball at St. Edward's University and at Vernon College.

In high school, Rudison played at Austin LBJ. Later an infielder, he pitched in a March 1984 game, starting and working into the fifth.

At Vernon College, Rudison won outstanding offensive player of the year honors in 1986. He then went on to St. Edward's.

Rudison made All-District at St. Edward's in 1988. He hit 16 home runs and scored 55 times that year, both numbers on the school's record list.

Rudison played his season with the Braves at rookie Pulaski in 1990. He got into 47 games, playing mostly at third base. He hit .218, knocked in 12 and stole six bases. Those numbers marked the extent of his pro career.