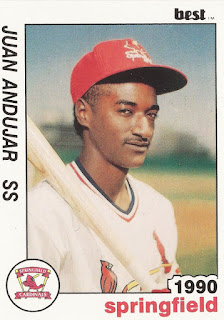 Juan Andujar could field, The St. Louis Post-Dispatch wrote in April 1992, but his hitting needed improvement.

The minor league shortstop entered his fourth pro season that year, his first at high-A.

"He might make it to the big leagues some day simply on the strength of his defense," The Post-Dispatch wrote, adding in parenthesis "Jose Oquendo couldn't hit in the minor leagues, either."

Andujar went on to play in a total of six pro seasons. But he never improved his hitting enough to advance. He briefly made AA. He never made the bigs.

Andujar's career began in 1989, signed by the Cardinals as an amateur free agent out of his native Dominican Republic. Andujar was the nephew of major league pitcher Joaquin Andujar.

Andujar started with the Cardinals at rookie Johnson City. He led the team in hits, hit seven home runs and scored 40 times. He also hit .254.

He moved to single-A Springfield in 1990, his average dropping to .213. He then played 1991 between single-A Savannah and Springfield. He hit .205 that year. But he led the South Atlantic League in fielding percentage.

After a season spent at high-A St. Petersburg in 1992, his average hitting .270, Andujar went to the Indians as an add-on in the trade that sent Mark Whiten to the Cardinals.