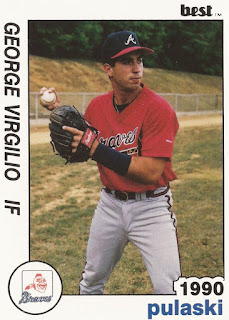 The big star of this game for single-A Macon was supposed to be a rehabbing David Justice, according to The Associated Press, but George Virgilio did his best to take some of that spotlight away.

Virgilio did so by hitting a grand slam for Macon, sending his team on to an 11-0 victory, The AP wrote.

That home run ended up being Virgilio's only long ball that year, his second with time in the pros. He went on to a career that saw time in six seasons, but he never saw AAA.

Virgilio's career began in 1990, taken by the Braves in the fourth round of the draft out of Elizabeth High School in New Jersey.

He played his first season at rookie Pulaski, the second baseman hitting .259 over 58 games. He also hit three home runs and knocked in 21.

After not being recorded as playing in 1993, Virgilio returned to the field for 1994 with the Expos at AA Harrisburg. He hit .259 there, with five home runs. He stretched a July lead with a late three-run double.

He then split 1995 between Harrisburg and AA Bowie. In 68 total games, he hit .202. It was his final year in affiliated ball. He's credited with returning in one more season, playing 1998 with independent New Jersey, ending his career.

In 2012, Virgilio was honored by his home county in New Jersey, inducted into the Union County Baseball Association's Hall of Fame.