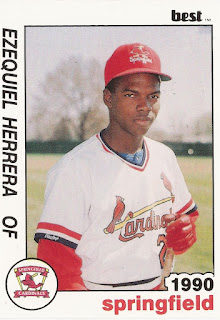 Ezequiel Herrera showed off his skills in his native Dominican Republic before he came to the United States.

Herrera took the field for Centro Olympico in the Dominican Summer League where he hit .330 and stole 12 bases over 49 games, according to his Best card.

Herrera then moved on to use his skills in the pros. His stay there ended up lasting three seasons. He didn't make AA.

Herrera's pro career began in 1990, signed by the Cardinals the previous year as an undrafted free agent out of Bani, D.R.

Herrera played his first season in the pros at single-A Springfield. He was also mentioned as a possibility for single-A Savannah. With Springfield, he hit .265 over 123 games, knocking in 42 and stealing 11 bases.