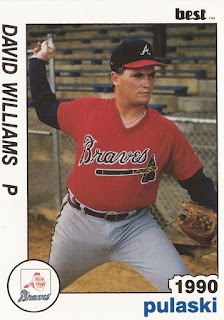 The Greenville Braves pulled out the walk-off win in this early September 1993 game and reliever Dave Williams was the beneficiary.

Williams came on late in the contest, pitching the ninth inning. His team's bats then did their job in the bottom of the inning, getting Williams the win.

That win was the reliever's second that season. It was also the last of his career. Williams played professionally for four seasons. His career ended with the end of that 1993 season.

Williams' career began in 1990, taken by the Braves in the 10th round of the previous year's draft out of the University of Arkansas-Fort Smith. Williams is also sometimes referred to by his formal name, David Williams.

He then made high-A Durham in 1992. He also saw his role changed to reliever. He picked up nine wins in relief. He also saved 15 games while turning in a 2.86 ERA.

Williams' final season came with AA Greenville in 1993. Williams' save total and his win total diminished. He saved three games, one an August contest. He also won two. His ERA also climbed to 4.15. It was his final season as a pro.