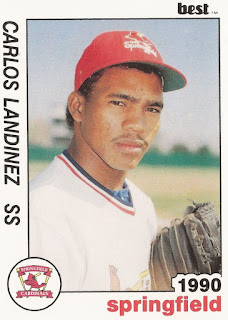 Carlos Landinez started his professional career off fast in 1989, according to his Best card.

Landinez hit safely in his first seven games played in the rookie Arizona League, including hitting a home run in his first game.

Landinez ultimately played in five professional seasons, but cooled off for much of them. He made it to high-A St. Petersburg, but no higher.

Landinez' career began that year in 1989, signed by the Cardinals as an amateur free agent out of his native Venezuela.

He played that first year in the Arizona League. He hit .253 over 47 games. He hit that single home run and knocked in 16.

Landinez returned to the Arizona League for 1990 and played at single-A Springfield. He hit .120 in 60 games at Springfield and .260 in 29 games in Arizona.