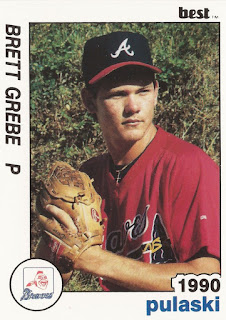 Brett Grebe continued to play baseball even when the economics of playing alone didn't make sense, he told The Los Angeles Times.

In an on-again, off-again career, Grebe took a job with the independent Mission Viejo Vigilantes in 1998. To do so, he only played home games and worked at a real job in the mornings, he told The Times.

Grebe spoke to The Times on the occasion of his career really turning on again. He'd been signed by the Angels to play AA ball. That affiliated stint ended up being his last. He went on to play in four more independent seasons. He never made it higher than AA.

Grebe's career began in 1989, taken by the Braves in the 12th round of the draft out of Westminster High School in California.

Grebe played that first year in the rookie Gulf Coast League. He got into 12 games, starting nine and had a 2.86 ERA. He moved to rookie Pulaski for 1990, but arm surgery ended his Braves career. He got only five starts there, with an ERA of 3.77 and didn't return for 1991.

It wasn't until nearly five years after he last pitched that Grebe's playing career was on again. He signed with the Pirates to play replacement ball in spring 1995. That led to renewed time in the minors. Still 24, Grebe played that year at single-A Augusta. He got into 32 games in relief and had a 3.62 ERA.

He then got brief time at Sacramento in 1999 and Solano in 2000. He closed out his career with a season at Long Beach in 2002 and one last one at Surprise in 2005. That final year, he also ran a hitting facility in Arizona, Arizona World of Baseball.