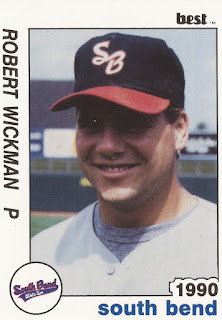 Awarded the Brewers closer job in 1998, Bob Wickman took off. He picked up saves on his first 10 tries and in 11 of his first 12 chances overall, according to The Racine Journal Times.

Wickman saw the move as the next step in his progression in the major leagues, according to The Journal Times.

"It's an opportunity to move up in my career," Wickman told The Journal Times. "I went from a starter to a middle reliever to a set-up man, and now I'm getting the opportunity to close. Hopefully, I can take that and run with it."

Wickman did run with it. From that start as a closer, Wickman became one of the league's best. He saved 25 games that year and 37 the next. In all, he went on to hit 30 saves in a season five times, leading the league with 45 in 2005.

Wickman also came back from missing the entire 2003 major league season working his way back from Tommy John surgery, notching two of his 30-save seasons after his return.

Wickman's career began in 1990, taken by the White Sox in the second round of the draft out of the University of Wisconsin-Whitewater.

He then moved to the Yankees for 1992, making the Bronx for eight starts. Wickman served those first three seasons exclusively as a starter.

Wickman returned to the Yankees for 1993. He went 14-4 over 41 outings, including picking up a May win by taking a no-hitter into the seventh inning. But he also got his first look at a non-starting role, pitching in 22 of those 41 outings in relief.

Over the next three seasons, he never got into fewer than 71 games for the Brewers, serving as the club's closer in 1998 and 1999.

In 2000, he made his first All-Star team before being traded at the deadline to the Indians. He then continued his closing work there until mid-2002, when elbow problems led to Tommy John surgery.

Wickman returned to the field briefly for rehab work in the minors in 2003. That August, he told The News-Herald of Ohio he expected to show the Indians he would return.

"They have to figure it out," Wickman told The News-Herald. "If there's any doubts in their minds, hopefully, I can answer all the questions. There's no doubt in my mind I can pitch again."

"Last year was great," Wickman told Crain's Cleveland Business in spring 2006. "It was fun. It was easy to work the baseball. It was like being a young kid again."