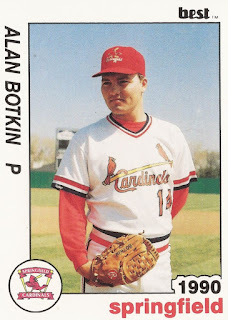 In the midst of the conference tournament, Clemson coach Bill Wilhelm pulled his starter Alan Botkin after a late lead-off single.

The single later came around to score, tying the game, according to The Spartanburg Herald-Journal. Clemson, though, went on to win.

"It's really hard to come out of a game like this," Botkin told The Herald-Journal afterward. "But coach has been saying all along that it’s a team game. I'm just happy we won."

Botkin went on from Clemson to play on other teams, ones in the pros. He spent six seasons there, in all, playing largely in the Cardinals organization. He briefly made AA.

Botkin's pro career began in 1989, taken by the Cardinals in the 23rd round of the draft out of Clemson.

Botkin didn't play in 1994, but returned in 1995, getting three games with the Expos at AA Harrisburg, then playing out the year at independent Albany. That July, he threw a two-hit shutout for Albany.

Botkin then briefly returned to Albany for three outings in 1997, ending his playing career.

Botkin has since gone on to a career in education, long serving at Cardinal Newman High School in Florida, serving roles that included athletic director. More recently, he's serving as employee relations coordinator at Georgia Tech.
1990 Minor League Tally
Players/Coaches Featured: 2,622
Made the Majors:1,024-39.1%
Never Made Majors:1,598-60.9%-X
5+ Seasons in the Majors: 425
10+ Seasons in the Minors:261
Posted by Steve78 at 2:18 PM