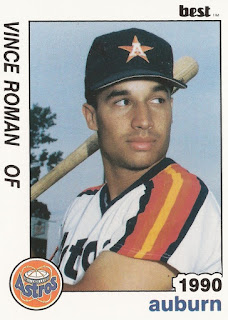 Ithaca College came from behind in the 1988 Division III College World Series championship game and Vince Roman played a big role in that.

Roman drove in three runs in the title-winning game, helping Ithaca to a 7-5 win, according to The Associated Press.

Roman went on from Ithaca College to play in the pros. He played five seasons there. He never made AAA.

Roman's career began in 1990, taken by the Astros in the 40th round of the draft out of Ithaca College.

At Ithaca, Roman made the all-tournament team as he helped Ithaca to the 1988 title. Roman, hitting leadoff, hit .402 and knocked in 32 runs overall that year. He picked up three hits in an April 1989 win.

With the Astros, Roman started with short-season Auburn. He hit .269 and stole 27 bases. He then played 1991 between single-A Asheville and high-A Osceola, hitting .281.

He made AA Jackson briefly in 1992, getting into 11 games there, hitting .222. He played the rest of that year at Osceola.

Roman moved to independent Rio Grande Valley for 1994. He went 3 for 4 in an August game, hitting a home run and knocking in three.

That May, Roman hit a long home run in a 10-9 Rio Grande Valley loss. Manager Alan Ashby pointed to Roman as consolation, according to The Brownsville Herald.

Roman hit .273 overall, with eight home runs and 27 stolen bases. It marked the final season of his career.