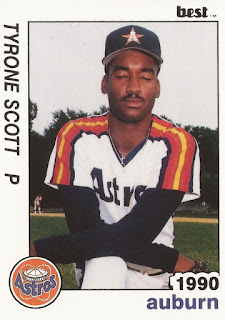 Scouts had their eye on Leuzinger High School hurler Tyrone Scott in April 1989, according to The Los Angeles Times.

In fact, the California teen had everything scouts looked for in a pitcher, Orioles scout Paul Fryer told The Times.

"He's fluid, he's got a live arm and he's an athlete," Fryer told The Times. "I think somebody will draft him."

Scott did get drafted and that somebody turned out to be the Astros. He played four seasons, but never made AA.

Scott's career began that year, taken by Houston in the fourth round of the draft out of Leuzinger.

At Leuzinger, Scott helped his team to a March 1989 win, striking out 14 while giving up just two hits, The Times wrote. It was enough for his coach to see big things for Scott.

"I feel Tyrone Scott will be a No. 1 draft choice for someone in June," coach Derrel Thomas told The Times afterward. "There has been a lot of interest in him. I get calls from scouts asking when Tyrone is pitching. They speak very highly of him."

After running into an elbow injury in April, Scott made it back in time for the draft. Still, the injury and inconsistency led him to drop from the once-hope-for heights of the first round.

"I didn't really perform the way I wanted to this year," Scott told The Times after being drafted. "If I pitched the way I know I could, I think I would have been taken in the first round."