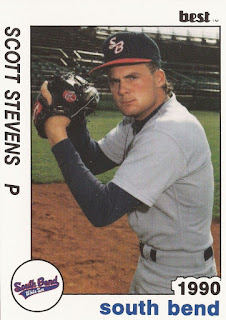 Scott Stevens used a low ERA and good record in 1989 to help his college team to the Junior College World Series that year.

Stevens went 9-3 in the run-up to the tournament and posted a 1.57 ERA as his Brookdale Community College to the JUCO tournament, the school's fifth all-time.

He went on from Brookdale to a pro career that spanned four seasons. He played three of those seasons in the White Sox organization. He made it to high-A, but never made it higher.

Stevens' career began that year in 1989, taken by the White Sox in the 17th round out of Brookdale in New Jersey.

Stevens worked to pitch his team into the tournament needing only three strikeouts to take the school's single-season record. He started a game in the tournament, but took the loss.

Stevens started with the White Sox at short-season Utica. He got into 22 games in relief, going 4-3, with a 1.96 ERA. He also saved four games.

He moved to single-A South Bend for 1990. In 50 relief appearances, he picked up six wins and 12 saves. He pitched two innings in an August game, giving up one hit.