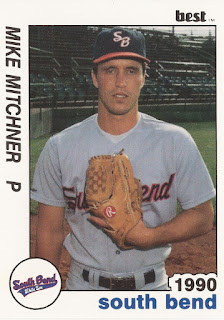 Mike Mitchener played baseball because he loved it, he wrote years later. He also used it as a way to pay for college.

So, when he turned pro in 1988, he made sure that the remainder of his college tuition would be paid for.

"I wanted to use baseball as a way to pay for my college," Mitchener wrote. "I had promised my parents that, and I delivered. Now I was in uncharted waters."

Mitchener went on to a pro career that lasted three seasons, then to a long career in management with Sam's Club.

But, if Mitchener was in uncharted waters when turning pro, he certainly was again on Sept. 11, 2014 and it almost cost him his life.

Mitchener suffered a massive heart attack. His heart stopped. Paramedics got it going again. His stopped a second time after arriving at the hospital.

"They got my heart firing again and brought me up to the cardiac unit where they determined that I'd had a 'widowmaker' heart attack, which normally has a 98 percent death rate," Mitchener said in an article on the hospital's site. "They knew they were battling time."

Mitchener survived and went on to write a book, a faith-based look at his experience and survival called "Bring the Rain."

Mitchener's pro playing career began in 1988, taken in the third round of the draft by the White Sox out of Armstrong State University in Savannah, Ga. Mitchener is also credited as Mike Mitchner.

Mitchener started with the White Sox at short-season Utica and in the rookie Gulf Coast League. The hurler got into nine games in relief, giving up one earned in nine innings of work.

Mitchener joined Sam's Club then eventually settled in Daytona Beach, Fl. In 2016, his Sam's Club was named regional Market Club of the Year. "I'm very proud to bring (the award) back to Daytona," Mitchener told The Daytona Beach News-Journal of the award.

He published his book in December 2016. The News-Journal published a story on Mitchener and his book Christmas Eve, including the prayer he expected to offer for that Christmas morning and each since his heart attack.