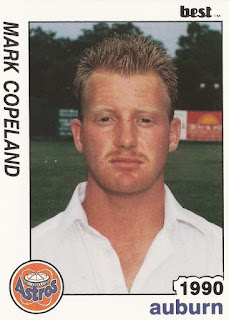 Mark Copeland won and award for his work in 2015.

For his work as director of professional outreach at Las Cruces, N.M.'s MountainView Regional Medical Center, Copeland received a Non-Clinical Director of the Year honor, according to Tiller-Hewett Health Strategies.

Copeland won that award long after the start of his career in the medical field. He started that career in baseball, as a minor league trainer.

Copeland graduated from New Mexico State University with a degree in sports medicine. He soon began using that degree with the Houston Astros.

Copeland spent three seasons in the Astros organization. He served as trainer at short-season Auburn in 1990. He also spent time in Kissemmee, Fla.

Copeland then moved on from baseball, working as a facility manager and athletic trainer, then going into marketing, serving as a general manager and account executive, according to his LinkedIn profile. He's served as physician relations manager at MountView since 2013, continuing in 2017.
1990 Minor League Tally
Players/Coaches Featured: 2,603
Made the Majors:1,023-39.3%
Never Made Majors:1,580-60.7%-X
5+ Seasons in the Majors: 424
10+ Seasons in the Minors:261
Posted by Steve78 at 11:00 PM