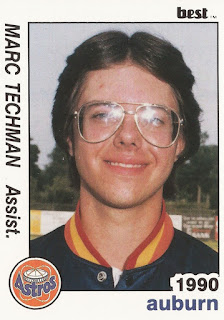 Marc Techman looked ahead to a career in baseball in 1990 - just as soon as he completed college.

In the meantime, he worked in baseball, for his hometown Auburn Astros. Techman worked for Auburn that summer as an executive assistant.

Techman started with Auburn in 1988, according to his Best card, holding the positions of clubhouse manager and head groundskeeper.

As he worked, he also attended school. Techman went to the University of Buffalo, majoring in statistics.

"After graduation, hopes to have a career in Baseball Administration," Techman's Best card reads.

His Best card also lists his hobbies as bowling, golf, racquetball and running.