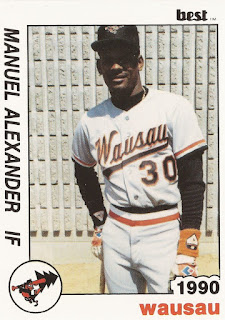 Manny Alexander got the opportunity in this spring 1996 game and he tried to take advantage, according to The Associated Press.

After all, the Orioles hadn't seemed to have had the need for another shortstop in a while.

"When you play behind Cal Ripken Jr., you don't know when you're going to play," Alexander told The AP. after that spring game. "I just try to work hard, keep in shape and be ready when they need me."

Alexander ended up getting his chance to play at shortstop and elsewhere over 11 major league seasons with six clubs. He saw time in 90 or more games in a season four times.

Alexander's career began in 1988, signed by the Orioles as a free agent out of his native Dominican Republic.

He first hit the field in 1989 at rookie Bluefield. He made single-A Wausau for 1990, then AA Hagerstown and AAA Rochester in 1992.

Alexander also got his first look at Baltimore in 1992. He got into four games that September, going 1 for 5. He returned to the Orioles for three more games in 1993, then became a regular in 1995.

He got into 94 games for Baltimore that year, playing mostly at second base. That July, he batted twice in the ninth inning, homering his first time and knocking in two with a bases-loaded single in his second, helping the Orioles to a win.

"I like to hit in those situations because the pitcher doesn't want to walk me since the bases loaded," Alexander told The AP afterward. "When we got a couple of guys on base, I knew we had a chance to win it or tie it."

For 1997, the Orioles traded Alexander to the Mets, then the Mets sent him to the Cubs in August. He hit .266 overall in 87 games. He played 54 of those games at shortstop.

After three seasons spent back in the minors, Alexander got back to the majors in 2004 for 21 games with the Rangers. He rounded out his career with 10 games with the Padres in 2005 and 22 final games there in 2006.

He spoke to MLB.com in September 2006, what turned out to be his final month in the majors.

"The game gets tougher as you get older, but I think to keep coming back is a good sign. I know a lot of people my age who are home right now," Alexander told MLB.com. "I can't complain about baseball. I'm having a great time and it has helped me in a lot of ways. This was my dream."