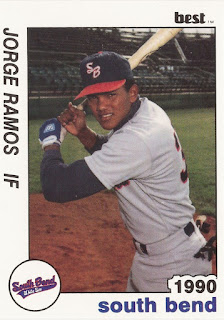 One newspaper account announced the White Sox signing of infielder Jorge Ramos by looking to the club's past.

The White Sox signed Ramos as an 18-year-old in early 1988 out of his native Anzoategui, Venezuela.

"A generation ago," the account in The Anniston Star went, "the White Sox had pretty good luck with a Venezuelan shortstop named Luis Aparicio."

Ramos' career began that year with the White Sox, assigned to the team's rookie league squad in the Gulf Coast League.

Ramos got into 26 games that year, hitting .306. He played 19 games at short and seven at third. He returned to the GCL for 1989, getting into another 46 games. His average, though, dropped to .213, while he again split time between short and third.