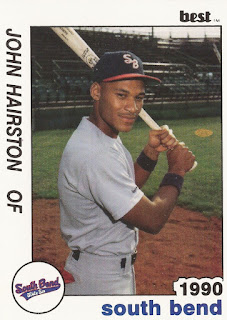 Speaking in 2015, John Hairston recalled his oldest daughter Alex getting her start in sports, according to Grant Magazine.

The father wanted Alex to play baseball, softball or basketball, not really soccer, he told Grant Magazine, the school magazine of Grant High School in Portland, Ore. But his daughter soon took to it, and Hairston did, too.

"After the first game, I brought her back to the house and I said, 'OK, this is what you need to do. It's all about scoring goals,'" Hairston told Grant Magazine. "So I set up a little net and all I did was teach her how to get the ball and kick it in the net."

If Hairston was partial to baseball and softball, that could be understood. Baseball, pro baseball especially, has been a part of his family for decades, from his grandfather to his cousins.

Hairston, while he played, never followed his other family members to the bigs. Hairston played four seasons, all in the minors.

Hairston's career began in 1989, signing with the White Sox as a free agent out of college. He graduated from Portland, Ore.'s Grant High School himself in 1985.

Hairston started with the White Sox in the rookie Gulf Coast League. He hit .213 over 22 games, stealing seven bases.

Hairston then is recorded as returning five years later, in 1996, with the Yankees at single-A Greensboro. He hit .216 over 59 games, ending his playing career.

Hairston then soon returned to Oregon and raised four daughters with his wife Paige. Another soccer-playing daughter, Mady Hairston, has gone on to play at the University of Tennessee, where she continues in 2017.