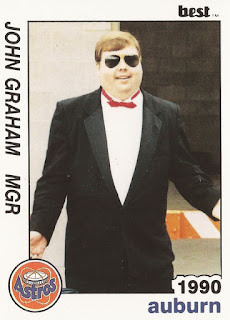 John Graham started work for the Auburn Astros in 1988 and he quickly learned the town was a baseball town, according to The Los Angeles Times.

Graham moved up to become the team's general manager in 1990, and he explained to The Times the connection between the game and the community.

"They all dedicate themselves to baseball here," Graham told The Times. "It's something you see in Little League, but not in minor-league baseball. Locals take in the players here. That's a dying trend. They feed them, they mother them."

Graham arrived in Auburn after starting work in baseball more than a decade earlier in his native Virginia.

Graham's first recorded time in pro baseball came in 1977. He worked for the Peninsula Pilots through 1987, eventually as vice president and general manager of the club. He watched Peninsula win the 1977 and 1980 Carolina League championships. He later called those wins as the biggest thrill of his tenure with the club.

"Baseball has always been a big part of my life," Graham said in the 1991 Auburn program, according to Astroland.net. "Watching former players make it to the majors is always a pleasure."