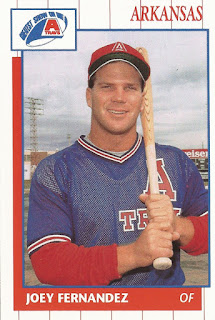 The Florida Gators ended a seven-game losing streak to rival Miami in April 1987 with Joey Fernandez doing his part to get the Gators to the win, according to The South Florida Sun-Sentinel.

Fernandez knocked in two of Gators' three runs on a fourth-inning double in the 3-2 Florida victory, The Sun-Sentinel wrote.

Fernandez had something else happen a couple months later that he likely waited for. He turned pro with the Cardinals. But, after playing six seasons as a pro, his wait to make the majors never paid off.

Fernandez' pro career began that year in 1987, taken by the Cardinals in the 26th round of the draft out of Florida.

Fernandez started with the Cardinals at single-A Savannah. He hit .271 over 63 games.

Fernandez made AA Arkansas in 1990, hitting .269 over the season. He walked and scored on a triple in an April game. He knocked in two on single and hit a home run in a July game.

He played 1991 at AAA Louisville, hitting .237 over 104 games. He returned to Louisville for 20 more games in 1992, marking the extent of his time in the Cardinals organization.