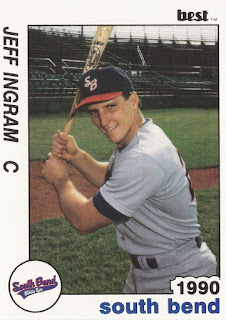 Jeff Ingram's University of New Orleans Privateers needed a big hit in this March 1988 game and Ingram provided it.

In the bottom of the eighth, his team down by one, Ingram knocked a single to tie the game against South Carolina, according to The Greenwood Index-Journal.

Ingram went on from New Orleans to turn pro. His pro career, though, ended up brief. He played two seasons, making it to single-A, but no higher.

Ingram's pro career began in 1989, taken by the White Sox the previous year in the 43rd round of the draft out of New Orleans. He went to New Orleans out of Shawnee Mission High School in Kansas.

Ingram started with the White Sox at short-season Utica. The catcher got into 50 games and hit .292. He also hit two home runs, knocking in 20.