Jeff Ball needed extra time to enjoy it - his first major league hit in ninth pro season; Didn't get another 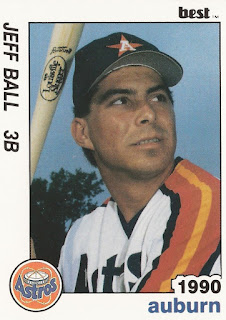 Jeff Ball responded to his first major league hit in June 1998 by asking for a time out, according to The San Francisco Chronicle.

After a long career in the minors, Ball required a breather.

"I told my first-base coach I needed a little extra time to enjoy this," Ball told The Chronicle, "because it took me eight years to get it."

As it turned out, Ball needed to savor that hit. He ended up being his only hit in the majors. He picked up that one hit in four major league at bats.

He went on to return to the minors and play briefly in Japan, but he never returned to the majors.

Ball's career began in 1990, taken by the Astros in the 12th round of the draft out of San Jose State University.

Beginning 1996, Ball became an unexpected starter at first base for Tucson. After a slow start at the plate, Ball picked up by mid-April.

"I've been working on stuff and I am starting to come around now," Ball told The Tucson Citizen. "I wanted to get off to a good start and I had a lot of stuff going on in my mind. I finally got back to the basics and I am doing my early work to get untracked."

Ball hit .324 that year for Tucson, but he never saw Houston. He then moved to the Giants system for 1997, playing at AAA Phoenix. He started 1998 back at AAA. Then, in June, he got his call to San Francisco.

Years later Ball explained the experience to The Lancaster Intelligencer Journal. "It was well worth it," Ball told the paper.

Ball played the rest of that year at Fresno, then the next at AAA Vancouver. In 2000, Ball went back to Fresno. He also went to Japan and got into three games with Hiroshima, getting two hits.

He went on to play in Mexico and in independent ball. His final time came in 2002 and 2003 at independent Atlantic City. He then took over the club as manager. He's credited as managing there from 2004 to 2006.