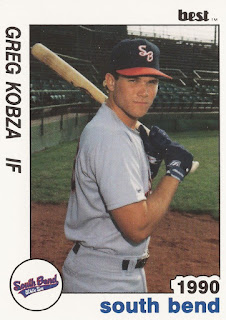 Greg Kobza described his coaching style in 2007 to The Houston Chronicle as "very aggressive." He wanted his Lamar Consolidated baseball team to constantly put pressure on the opposing defense.

"Our goal," Kobza told The Chronicle, "will be to put the ball in play, to run the bases and make as many things happen as you can, and to put a strong defense on the field, especially up the middle at catcher, shortstop and second base."

Kobza spoke as he took over as Lamar Consolidated baseball coach outside Houston. He turned to coaching after a brief career as a player himself. Kobza played four seasons in the minors. He made it briefly to AA, but no higher.

Kobza's pro career began in 1989, taken by the White Sox in the 11th round of the draft out of Texas Tech University. He also attended Blinn College and graduated from Stroman High in Victoria, Tex.

Kobza started with the White Sox at short-season Utica, playing at first and third. He hit .215 over 68 games. He then moved to single-A South Bend, where he hit .268. He went 0 for 5 in an August game.

Kobza finished out his career in 1992 with the Brewers at high-A Stockton. He got into 57 games, hitting .198, ending his playing days.

He later moved into coaching. In 2015, serving as coach at George Ranch High School, one of his baseball former players went on to Bossier City Community College, the daughter of former major leaguer John Hudek, Sarah Hudek.

Kobza recalled to The Chronicle being unable to think of a reason why the girl couldn't play on his team.

Sarah Hudek's father recalled to MLB.com Kobza integrating her into his team.