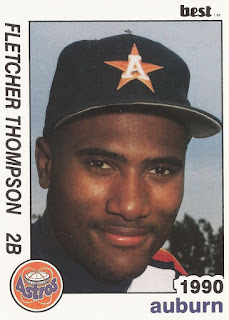 Fletcher Thompson showed off his speed in college and in the pros.

In college, he stole 38 bases for Nicholls State in 1989, then swiped another 40 in 1990 before being drafted by the Astros.

In the pros, he stole 37 bases in his second season, then 47 in his fifth. He stole 118 bases over his six-season pro career.

None of Thompson's stolen bases, however, came in the majors. He made it as high as AA, but he never made the bigs.

Thompson's pro career began in 1990, taken by the Astros in the 11th round of the draft out of Nicholls State University in his native Louisiana.

Thompson isn't recorded as playing in 1992. He returned to the field in 1993 at AA Jackson. He hit .294 there over 98 games and stole 23 bases. He reached on an error and scored in an August game and reached on a single and got stranded in another.

Thompson then moved to independent ball, playing 1995 with Alexandria. He stole a career-high 47 bases that year and hit .343. He also played 11 games at AA El Paso with the Brewers.