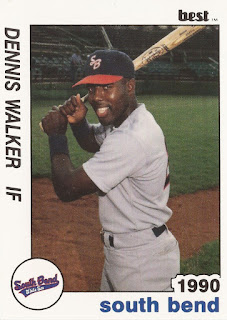 The infielder got into 247 games for the team, tied for the fifth most. His 804 at bats is still top 10. He also picked up 12 triples, was hit by a pitch 16 times and also ranked high in strikeouts and getting caught stealing, according to the team's record book.

Walker went on from South Bend to make high-A Sarasota and AA Birmingham. In six professional seasons, though, he never made the majors.

Walker's career began in 1988, taken by the White Sox in the 11th round of the draft out of Grambling State University in Louisiana.

Walker started with the White Sox in the rookie Gulf Coast League. He got into 50 games and hit .238 playing at third.

He moved to short-season Utica for 1989. He hit .230 over 72 games. In the field, he led all third basemen in fielding percentage and putouts.