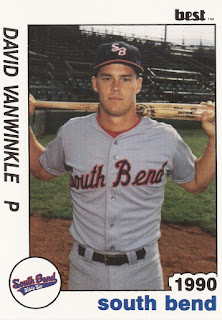 The Northwestern Wildcats closed out their 1989 season and started their rebuild. Two seniors and a junior were deemed by one account pro prospects and needed replacement.

One of those prospects was pitcher David Van Winkle, a senior. Van Winkle did start his pro career that year, but his career ended up being limited. He played three seasons, never making AA.

Van Winkle's career began in 1989, taken by the White Sox in the 12th round of the draft out of Northwestern. Van Winkle is also credited as Dave Van Winkle and David VanWinkle.

He started with the White Sox at short-season Utica. In 17 outings, two starts, he ended with a 5.13 ERA, three wins and two saves. He combined with two other pitchers on a 14-strikeout shutout in a July game.