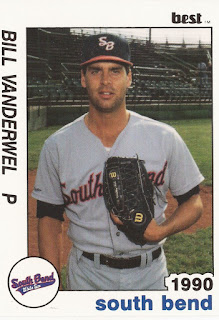 Bill Vanderwel represented his home country in 1984 and he did it well, according to The Medicine Hat News.

Vanderwel, a native of Sarnia, Ont., took the mound for Canada in the World Youth Baseball Tournament in Saskatchewan, pitching Canada to an 11-3 win over the Dominican Republic, according to The News.

Vanderwel went on from that tournament to play college ball in the United States and play professionally. His professional career lasted five seasons. He never made AA.

Vanderwel's career began in 1986, taken by the Angels in the fourth-round of the January draft out of Seminole Community College in Florida. Vanderwel also played at the University of Houston.

Vanderwel picked up a loss for Houston in April 1985, giving up 11 hits.

With the Angels, Vanderwel started at short-season Salem. He went 8-3, with a 3.38 ERA over 13 starts. The 2015 Salem-Keizer media guide records Vanderwel as the ace of 1986 squad's staff.