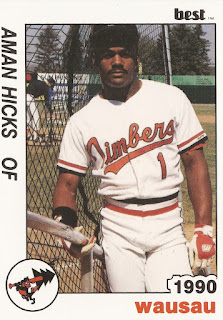 Aman Hicks hardly made anyone's radar at the start of his spring 1988 high school season, according to The Los Angeles Times.

By the end of it, he was a fourth-round pick.

"He popped out of nowhere," Orioles scout Ed Crosby told The Times. "I think someone saw him run down the first-base line and took notice."

Hicks signed with the Orioles that year and he went on to a career that spanned four years. He never made AA.

The Orioles took Hicks in the fourth round of the 1988 draft out of Gardena High School in California.

At Gardena, Hicks won all-league honors that year, hitting .526, stealing 20 bases, according to The Times.