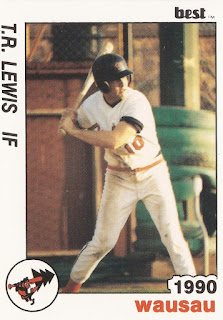 The Bowie BaySox were down by one in the ninth, with two on base when T.R. Lewis stepped to the plate, The Baltimore Sun wrote.

Lewis promptly ended this May 1993 night, with a walk-off double.

"It's what we all dream of -- getting the game winning hit with two out in the ninth," Lewis told The Sun. "You don't get many bigger than that."

Lewis was in his fifth year of professional ball that year at Bowie. He would go on to play in 11 pro seasons. Lewis, though, never got to play a game in the majors, making it to AAA for parts of five seasons, but never making it to the bigs.

Lewis, whose full name is Theodore Roosevelt Lewis, began his career in 1989, taken by the Orioles in the fourth round of the draft out of Sandalwood High School in Jacksonville.

He moved to single-A Wausau and then high-A Frederick. Lewis, though, didn't make AA until that year with Bowie in 1993. With Bowie that year, he hit .304 on the season.

Going into the next year, Lewis worked to go higher. He also worked to beat back the notion from teammate and friend Gregg Zaun that they were forming a band, according to The Sun. "There is no band," Lewis told The Sun, laughing. "He's dreaming. It never really began. You've got to have talent to have a band."

That year, Lewis got his first look at AAA, with 55 games at AAA Rochester where he hit .305. Lewis made it back to AAA for each of the next four seasons, going through the Red Sox, Braves and Rangers systems. But he never made the majors.

Lewis' playing career finally ended in 2000 with 30 games played in the Atlantic League with Aberdeen.

Lewis has since gone on to serve as an area scout for the Diamondbacks, and earlier as an agent for his friend Zaun. In 2006, Lewis explained to CBC Sports the difficulties of working out a contract.

"It's tough for players to understand sometimes that it's business, not personal, and to be able to have thick enough skin to weather any complications," Lewis told CBC Sports. "Some things are difficult for a player to hear."