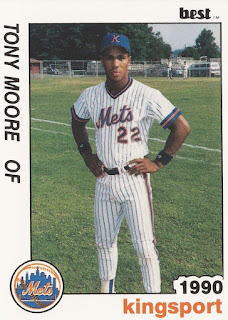 Tony Moore reaches back to his own baseball experiences when teaching younger players the game, he wrote on his web site, DiamondAthleticsBaseball.com.

Those experiences, he wrote, taught him about himself and his vision for playing baseball.

"I believe every player should have a 'vision quest,'" Moore wrote on his site, "about what kind of player they want to be and should set goals and work hard to achieve those goals even through set backs. One only needs desire and determination to reach his own goals."

Moore turned to instruction after a career as a player. He played five seasons. He never made single-A.

Moore's playing career began in 1988, taken by the Mets in the 37th round of the draft out of James Madison High School in San Antonio, Tex.

Moore moved to rookie Kingsport for 1990. In 44 games there, he hit .223, with four home runs. That season proved to be his last in affiliated ball.

He returned home to Texas and signed on with independent San Antonio of the 1994 season. He hit eight home runs in 72 games, turning in a .201 average.

His final season of pro ball came in 1995 at independent Rio Grande Valley. He singled and scored in a May game and picked up two hits, one a home run, in a June game. Overall, he hit .236 in 45 games, ending his career.