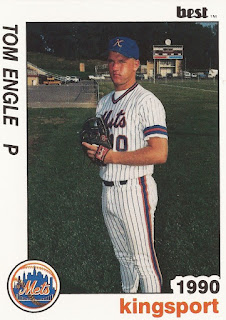 ESPN's College GameDay prepared to head to Stanford for the first time in November 2011 and GameDay producer Tom Engle spoke about the show to The Stanford Daily.

"People always ask what’s the best place we've ever been," Engle told The Daily, "and I always tell them someplace we've never been. We've never been to Palo Alto, and expectations are obviously very high for the show. Our talent really feeds off the energy of the crowd."

Engle had been a lot of places in both his ESPN GameDay career and his earlier career in a completely different sport, baseball. Engle played seven seasons. He briefly made AAA, but he never made the majors.

Engle's baseball career began in 1989, taken by the Mets in the second round of the draft out of Fairfield Union High School in Ohio.

The Mets took him after he tied a national high school record by throwing six-consecutive no-hitters, according to his hometown Columbus Dispatch.

Engle played his first two seasons with the Mets at rookie Kingsport. He started 12 games each season, going 3-4 and 6-3. He moved to single-A Columbia for 1991, getting into just seven games, starting five.

Elbow problems that required reconstructive surgery ended his 1991 season and kept him off the field for all of 1992.

He returned to the field for 1993, splitting time between single-A Capital City and short-season Pittsfield and using his knuckle-curve.

Engle played again at Capitol City for 1994. He then made AA Binghamton and, briefly, AAA Norfolk in 1995. He played a single game at Norfolk, giving up four earned in three innings of work.

Engle played one more season in independent ball at Tri-City and Evansville, ending his playing career.

Engle then went to Ohio State, receiving a degree in broadcasting. He also started work at ESPN. In 2009, he spoke to The Dispatch about his second career, and his three sons.