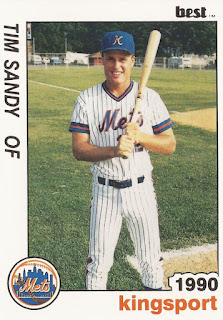 Fargo-area coach Jim Honl knew the Sandy family. He coached father Tim Sandy to a state American Legion title, according to The Forum of Fargo-Moorhead.

Then, in 2014, Honl coached Sandy's son Luke to a state Babe Ruth championship, The Forum wrote.

"Tim was a really good lefty batter and Luke is the same way – he's leading our team in hitting," Honl told The Forum.

The father went on from that American Legion team to a career in the pros. His pro career lasted four seasons. He made it briefly to AAA, but not the majors.

Sandy's career began in 1989, taken by the Mets in the 54th round of the draft, out of Kishwaukee Junior College in Illinois.

He played his final season largely at AA Binghamton. In 70 games, he hit .242. He went 2 for 3 in an August game, knocking in one. Sandy also saw four games at St. Lucie and six at AAA Norfolk. That season marked the end of his career.