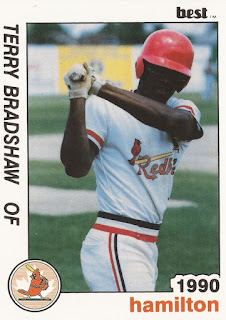 Called up to the Cardinals in May 1995, Terry Bradshaw wasted little time in making an impact.

Bradshaw walked up to the plate as a pinch hitter in the sixth inning and promptly singled to left for his first major league hit in his first at bat. He then stole second.

"The funny thing is that when I was in the batter's box, I was a little nervous, but pretty much relaxed," Bradshaw told his hometown Newport News Daily Press days later. "The real jitters came when I reached first base. My legs started shaking. I don't know how to explain it, but once I got to first, my legs just started to go."

Bradshaw ended up going over a decade in the pros and over brief stints in two major league seasons. He's since gone on to a career as a coach, helping get others to go on to the bigs themselves.

Bradshaw's career began in 1990, taken by the Cardinals in the ninth round of the draft out of Norfolk State University.

Bradshaw drew interest before reaching college, at Windsor High School in Virginia, his coach there Tex Murray recalled to The Daily Press in 1991.

"I don't think we played a game where at least four scouts weren't there watching Terry. He got to know all of them," Murray told The Daily Press. "They'd all behind third base in their lawn chairs and with their stop watches."

Bradshaw started with the Cardinals at short-season Hamilton. He hit .234 over 68 games. He then moved to single-A Savannah, but lost all of 1992 to knee surgery.

He returned for 1993, playing at high-A St. Petersburg. He then played 1994 between AA Arkansas, AAA Louisville - and St. Louis.

Bradshaw got into 19 games for the Cardinals that year, picking up 10 hits in 44 at bats. He then returned for 15 more games in 1996, going 7 for 21, marking the extent of his major league career.

He continued to play in the minors through 1999, ending with the Expos and AAA Ottawa. He then turned to his second career as a hitting coach.

Bradshaw started as hitting coach with the Royals at single-A Charleston. He's also coached at high-A Wilmington, AA Northwest Arkansas and AAA Omaha. In 2012, he won the Texas League Mike Coolbaugh Coach of the Year.

He's continuing with the Royals in 2017 as minor league hitting coordinator, his fifth season in that role.