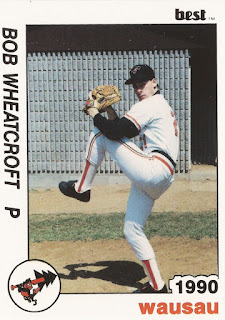 Robert Wheatcroft made it back from college shoulder surgery to to pitch for Cal State Northridge February 1989. He told The Los Angeles Times each outing got him closer to his best.

"I'm still not up to par and the velocity is not there yet," Wheatcroft told The Times. "But I am hitting the spots and the breaking stuff is getting over. The velocity will come."

Wheatcraft made it back enough to make the pros, but not enough for a long career. He played just two seasons. He never made AA.

Wheatcroft's career began that year in 1989, taken by the Orioles in the 32nd round of the draft out of Northridge. Wheatcraft is sometimes credited by his more informal name, Rob Wheatcraft.

At Northridge, Wheatcraft picked up his sixth win in a March 1989 complete game, then threw another complete game in April. After a rough May win, Wheatcroft's coach Bill Kernen touted to The Times Wheatcroft's ability to come back.

"He's gotten bitten by the home-run ball a lot," Kernen told The Times. "It's made him throw a little less and pitch a little more."

Wheatcroft started with the Orioles in 1989 between rookie Bluefield and short-season Erie. In 17 outings, 13 starts overall, Wheatcroft went 7-5, with a 4.42 ERA.