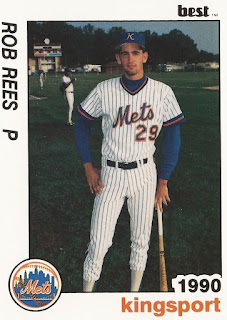 Lake Washington High School coach Dave Chambers looked back in 1990 to a couple of his top pitchers from recent years, one of them 1989 graduate Rob Rees, according to The Seattle Times.

"We didn't get very far in the playoffs with those two guys," Chambers told The Times. "I don't know if we will this year either. I think the competition we had when those guys were pitching was possibly a little above what we are facing this year."

Rees started his pro career in 1989, but he didn't get very far himself. He played five seasons as a pro. He never made AA.

Rees was taken out of Lake Washington by the Mets, selected in the sixth round of the draft.

Rees started with the Mets in the rookie Gulf Coast League. He got into 11 games, starting seven. He ended with a 4.81 ERA.

Rees returned to Columbia for 1992, getting three outings at high-A St. Lucie. He hit a batter in an April contest at St. Lucie, knocking that player out of the game.