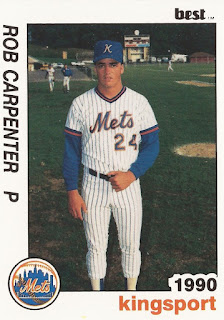 Rob Carpentier's team of Little Leaguers headed to the district tournament in July 2012 and the team manager hoped his kids would come through, according to The North Andover Eagle Tribune.

"It's a talented group for sure, but we have to play like we can play," Carpentier told The Eagle Tribune. "You always need a break or two. And you need your big guys to make big plays."

Years earlier, Carpentier played like he could play and it got him to the pros. He saw time in four seasons overall. He never made AA.

Carpentier's baseball career began in 1990, taken by the Mets in the 26th round of the draft out of the University of New Hampshire. Carpentier is also credited as Rob Carpenter.

Carpentier played baseball and skied at Andover High School and then spent time at Vermont Academy. He then spent three years at New Hampshire, going 6-4, with a 3.50 ERA his final year there, according to The Andover Townsman.

At Andover, Carpentier got to see a future major leaguer with a rival high school in Tom Glavine. Carpentier was a sophomore reserve when Andover faced Glavine, The Eagle Tribune wrote.

"He's the best that I remember, definitely," Carpentier told The Eagle Tribune. "You were kind of awestruck. I remember him being very calm and businesslike, which is ahead of your time when you're 17 years old."

With the Mets, Carpentier started work at rookie Kingsport. He got into 22 games, starting eight. He went 6-1, with a 1.76 ERA. He took a no-hitter into the ninth inning of an August game, leading the league in ERA.