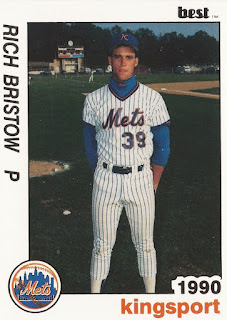 Bristow didn't give up a hit in the scoreless contest - until a late bunt, according to The Chicago Tribune. That bunt, though, brought home a runner Bristow had hit by a pitch. That one run proved the difference as Bristo took the loss.

Bristow went on from Geneva High to a career in the pros. Bristow played in four seasons. He never made AA.

Bristow's pro career began in 1988, taken by the Mets in the 32nd round of the draft out of Geneva, Ill.

At Geneva, Bristow also played football and baseball. He scored 17 in a February 1986 basketball game and threw for 162 yards in an October 1987 football game.

Bristow started with the Mets in the rookie Gulf Coast League. He got into 13 games, starting one. He went 2-3, with a 8.31 ERA.