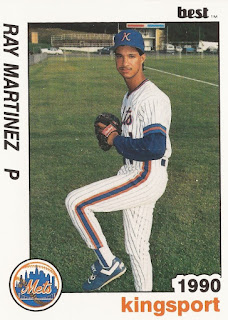 From Reynaldo Martinez' first professional season to his second, his ERA jumped.

Martinez ended up playing just two pro seasons. He never made it higher than single-A.

Martinez' career began in 1989, signed by the Athletics as an undrafted free agent out of New York City. Martinez has also been credited by the name Ray Martinez.

Martinez played his first season in the rookie Arizona League. There, he had that 1.82 mark over 27 relief outings. He struck out 38 over 49.1 innings.

For 1990, he moved to single-A Madison. He got into just six games in relief there, giving up four earned in 7.2 innings.

Martinez then continued his 1990 season with the Mets at rookie Kingsport. He got into 20 games there, starting one. He ended with a 7.41 ERA and 26 strikeouts. It was his final season as a pro.