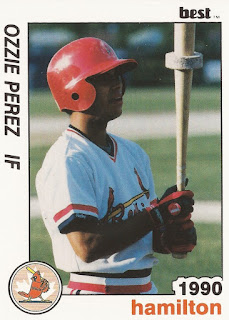 Ozzie Perez started in Puerto Rico and has ended up in Florida.

In between, he played in Canada, Georgia, as well as Florida. He also scouted and settled in as a youth coach and instructor, according to the bio on his site, TeamOzzie55.com.

Perez' career began in 1987, signed by the Reds as an 18-year-old out of his native Puerto Rico. Perez is also credited by his given name Jesus Perez.

Perez credits scouting director Jose Centeno with spotting him in Puerto Rico and giving him a chance to play internationally and coaches Johnny Ramos and Roberto Rivera with getting him ready for the pros, according to his site.

Perez started with the Reds in the rookie Gulf Coast League. He got into 30 games as an infielder and hit .176.

He then returned to the field in 1990 with the Cardinals. He played at short-season Hamilton, hitting .184 over 61 games. He also got into one game as a pitcher, going one inning and giving up no runs.

Perez played his final season in 1991 at single-A Savannah. He got into 25 games, hitting just .098, ending his career.