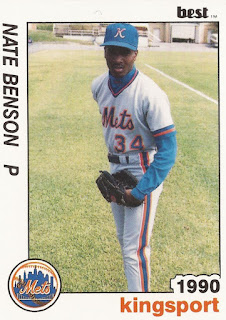 Nate Benson helped his Leo High School team both on the mound and at the plate in this April 1987 game, The Chicago Tribune wrote.

He knocked a two-run single in the seventh and then pitched the final two innings without giving up a run to record the save, The Tribune wrote.

Benson went on from Leo to play professionally as a pitcher. He played three seasons. He never made AA.

Benson's professional career began in 1988, taken by the Mets in the 50th round of the draft out of Leo.