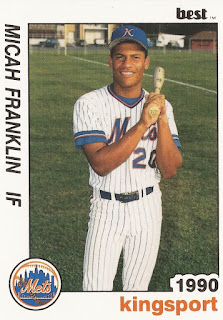 Called up to the majors for the first time in May 1997, Micah Franklin got sent back down in June.

He'd played well and he hoped to continue to play well to make the return trip to the bigs, he told The St. Louis Post-Dispatch.

"I enjoyed it; I enjoyed every day here," Franklin told The Post-Dispatch. "It definitely makes you want to go down (to Louisville), play hard and get back."

Franklin did get back - for two more games later that month. He never returned to the majors after that. He did go on to a pro career that spanned 15 seasons, including trips to Japan and Korea. He last saw time in 2004.

Franklin's pro career began in 1990, taken by the Mets in the third round of the draft out of Lincoln High School in San Francisco.

He started with the Mets at rookie Kingsport. He moved to short-season Pittsfield and Erie for 1991 and then to the Reds and rookie Billings for 1992.

Franklin made AA Chattanooga with the Reds in 1994, then moved to the Pirates and AAA Calgary for 1995. He hit 21 home runs for Calgary, including five in a seven-game span in late May and early June.

After going through the Tigers system, Franklin arrived with the Cardinals at AAA Louisville in mid-1996. He debuted in St. Louis in May 1997. He went 3 for 5 in his second game, hitting a home run. After 17 appearances, he played his final major league game June 28.

Despite his home run output, Franklin only saw 13 games there in 2000, caught up in the foreign player quotas and injuring his hand.

He played  2001 at AAA with the Brewers, then 2002 at AAA with the Diamondbacks and in Korea. The switch-hitter hit 17 home runs at Tucson, including two - one from each side - over Tucson's version of the Green Monster, according to The Tucson Citizen.

"There is a lot of luck involved," Franklin told The Citizen of the home runs. "I didn't think I could actually do it. Both happened to be on the right night, I guess, and in the right situation."

Franklin returned to Korea for 2003, then rounded out his career in the minors with the Diamondbacks and White Sox in 2004.