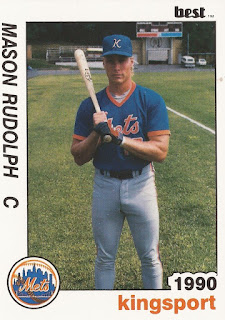 "It's surprising," Davini told The Republic. "For a kid who hasn't caught that much at all, he is fundamentally sound. I really like him. He doesn't have that great quick release yet, but he'll get it. He's got a heck of a strong arm, though. And his hitting? Well, you know what he did this season."

Rudolph went on from Mesa's Dobson High School to a pro career spanning eight seasons. He played catcher throughout. He briefly made AAA, but not the majors.

Rudolph's career began that year in 1988, taken by the Mets in the 17th round  of the draft out of Dobson. Rudolph is the son of former major leaguer Ken Rudolph, according to The Republic.

Rudolph started with the Mets in the rookie Gulf Coast League. He got into 31 games and hit .170. He then moved between the GCL and rookie Kingsport for 1989 and Kingsport and short-season Pittsfield for 1990.