Marty Jones, All Together - 15 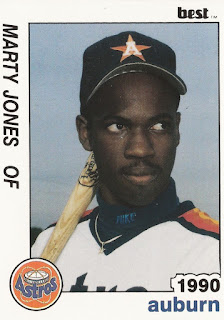 Marty Jones got out to a slow start in the Astros organization in 1988, hitting sub-.200 over his 32 games that season in the rookie Gulf Coast League.

Early in the 1989 season, though, it seemed like Jones started to figure things out, his GCL manager Julio Linares told Jones' hometown Orlando Sentinel.

"I've been with Jones for two years now and the improvement he's made has been tremendous," Linares told The Sentinel a couple weeks after the short-season began. "He is hitting the ball better, and he is making the right decisions in the outfield. He is close to putting it all together."

Jones never did put it all together. He finished out that season with another sub-.200 campaign. He then returned for one more year in short-season ball. He never made it higher.

Jones' career began in 1988, taken by the Astros in the 11th round of the draft out of Edgewater High School in Orlando. Jones is also sometimes credited by his formal name, Maurice Jones.

Jones' final pro season came in 1990 at short-season Auburn. He got into 30 games, mostly in the outfield, and hit .200. He also tried his hand on the mound three times, giving up seven earned in 2.1 innings of work.