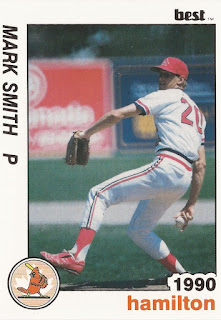 Mark Smith stayed unbeaten in this April 1987 game and his San Jacinto College team recorded another win - and clinched a conference title.

Smith went eight innings, gave up two runs and picked up his 10th win to no losses, according to The Baytown Sun.

Smith went on to go 16-1 that year, play at the University of Texas at Austin and in the pros. He lasted five professional seasons. He made it to AA, but no higher.

Smith's pro career began in 1990, taken by the Cardinals in the 10th round of the draft out of Texas.

Smith then moved to Texas and then to the pros. He started with the Cardinals between single-A Springfield and short-season Hamilton. He went 6-6 between them, with a 3.99 ERA.

He made high-A St. Petersburg in 1991 and then returned to Springfield for 1992 before moving to the Orioles system mid-year. He finished out that year at single-A Kane County, going 11-7 overall, with a 3.85 ERA.