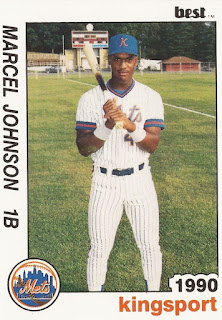 Curt Flood thought of his nephew Marcel Johnson in 1989 when recounting his own impact on the game.

Flood's own lengthy major league career largely came to an end as he paved the way for future players to make their share through free agency, rather than being tied strictly to the club he originally signed with.

Johnson signed with the Mets that year and went on to play as a pro. He never got to take advantage of what his uncle did for major league players. Johnson played three seasons. He never made it out of rookie ball.

Johnson's career began that summer, taken by the Mets in the 22nd round of the draft out of Fremont High School in California. He grew up in Oakland.

Johnson started with the Mets in the rookie Gulf Coast League. In 53 games, he hit .190. He hit two home runs and knocked in 14.

He then moved to rookie Kingsport for 1990. He hit 220 there in 35 games, marking the extent of his Mets career.