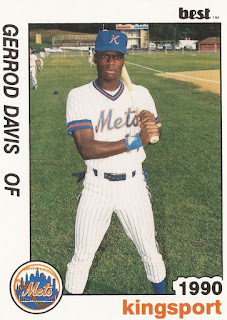 Jay Davis played nearly two decades without making the majors. But he did become a star.

Davis' star ended up rising across the Pacific Ocean, in Korea.

"Jay Davis had far and away the best career of any foreign hitter in the KBO, with Tyrone Woods as the only other player in the conversation," one blogger, Burly's Baseball Musings, wrote in 2016.

Davis' Korean longevity helped him break the league's foreigner RBI title in 2005. He hit 30 home runs in a season twice and hit at least 19 in each of his seasons there. He played all seven seasons with Hanwha.

In all, Davis played in 19 professional campaigns. He spent brief stints in three of those seasons at AAA, but he never made the bigs.

Davis' career began in 1989, taken by the Mets in the 12th round of the draft out of Orr High School in Chicago. Davis is also sometimes credited by his given name, Gerrod Davis.

Davis started with the Mets in the rookie Gulf Coast League. He moved to rookie Kingsport in 1990 and single-A Columbia in 1991. He hit .297 in 132 games at Columbia.

Davis also saw AAA briefly in 1994, getting into six games at AAA Norfolk. He got into another 10 games there in 1995, tripling and scoring in an April game. His final AAA and affiliated time came in 1996 with 33 games at Tucson for the Astros.

Davis continued playing in Korea through 2006, with the exception of one season played in Mexico. He broke the Korea foreigner RBI record in September 2005, logging his 511th career Korean RBI on a home run. Video of his shot is available on YouTube.

Davis then ended his career in 2007, playing between Mexico and independent St. Paul.